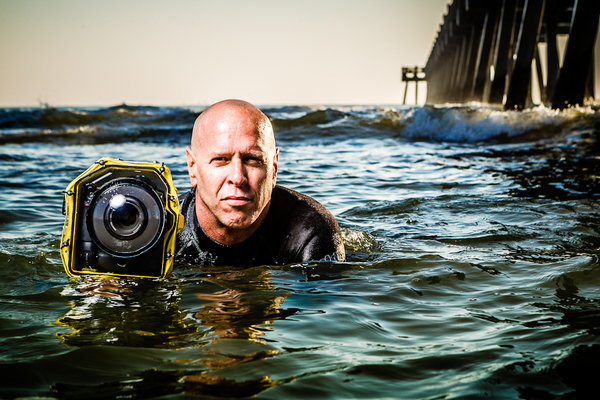 Mark Wilson is an artist who loves photography, a photographer who loves to surf and a surfer whose art is beginning to get noticed. Wilson, who in 2011 won one of Magic Seaweed’s highest profile international photographic competitions with an iconic shot of his home break, has been catching waves for 40 years and light, for nearly as long. And while today he finds his profile rising rapidly in the surfing world, he still struggles mightily with the same dilemma that caused him to give up surf photography in the first place, back when he first attempted it as a teenager using a Kodak instamatic and oversized water housing: “When the waves are good, I’d rather be riding them.”

It was this conundrum that originally convinced the soft-spoken, reflective Wilson to forsake surf photography for mountain bike photography. Also an avid cyclist, Mark found far more peace shooting fixed slabs of stone, than moving hills of water, because this was a backdrop that was largely unchanging, while the latter materialized only on the breath of fortunate winds. As a result, Wilson relocated to southern California, a place where he could enjoy the best of all worlds. There, he was able to hone both his biking and photography, without sacrificing his water time. Along the way, Mark found an audience for his mountain bike images, getting published for the first time.

Mark’s success and growing focus led him to Moab, Utah– a stunning amalgamation of red rock, blue water and some of the greatest mountain biking on the planet. Wilson took a job helping manage Moab Cyclery with a good friend and fellow mountain biker from California. Continuing to shoot and make the most of his surroundings, he began selling his work to magazines, getting published in popular titles like Bike Magazine, Mountain Bike Action, Mountain Biking and Men’s Health, while also working for various advertisers. Mark’s personal style, which is less action-oriented and more artistic, began to evolve at this time. His images are both sublimely “real”, yet out-of-the-mainstream.

With his passion for art continuing to grow, loved ones still residing in Florida and that old ghost, Mother Ocean, still calling him, Mark decided to return east and study photography at Southeast Photographic Studies in Daytona Beach. He began to create, frame and sell prints at various high-profile festivals throughout the southeast and other areas around the United Sates, enjoying a fair amount of success, awards and notoriety.

Unfortunately, the recession came along and like so many, Mark saw his ability to make a living in his preferred field become much more challenging. He took a job at a frame shop and his photography became a secondary source of income. During this time, living back near the ocean, and with years of professional experience now under his belt, Mark couldn’t help but remarry his passions for surfing and photography again.

He purchased a new water housing, lenses and upgraded digital equipment in 2010, and it didn’t take him long to make an impact. His beautiful, understated shot of a perfect A-frame dotted with surfers ignoring a “U.S. Government Property. No Trespassing.” sign at the Mayport Naval Base (known affectionately as, “The Poles”) during Hurricane Katia received more votes than any other in Magic Seaweed’s online competition. His win resulted in a 2012 commission from the popular website to shoot Hurricane Leslie along Florida’s east coast, and subsequently, a spectacular 25-shot front page feature. Wilson’s work is also continuing to gain notoriety with several images published in some of the southeast’s highest profile surf publications, as well as a recent portfolio feature on The Inertia.

While Wilson’s success continues to grow, he harbors no illusions about the challenges facing full-time surf photographers today. From geographic limitations, to equipment expense to the new ubiquity of digital imagery spawned by a sea of one-touch filters, he knows the barriers are high. But Mark is a professional who also knows that there will always be a divide between those who understand artistic composition, lighting and shutter speeds and those who merely pop filters on. Really, the only obstacle that still gnaws at Wilson –that still makes him question what he’s doing– is the same one that has vexed him his entire life. When the waves are good, he’d rather be riding them.