The Real Winners of the World Title Race: The ASP and Pro Surfing Fans 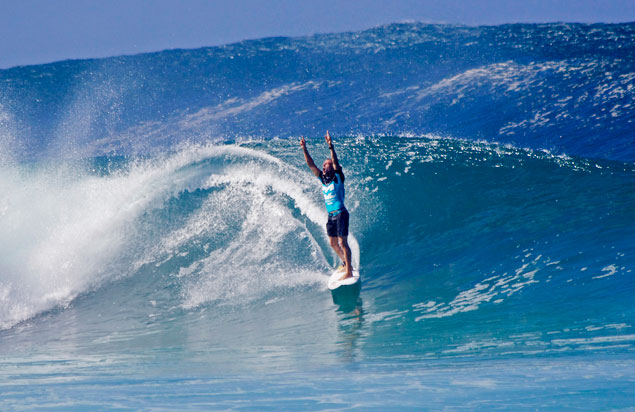 The real winners weren’t even in the water. Photo: The Surf Channel | Emily Bates

Cry all you want. Light up the net with rants, raves and conspiracy theories. Break down the heats, waves, drops, barrels, surfers, scores, could-have-beens, should-have beens and never-gonna-be’s. The contest is over. And while nerves were frayed, dreams shattered and emotions overflowed, one thing is clear – the winners of this year’s epic battle on the North Shore far outnumbered the losers. Kelly picked up his seventh Pipe Masters. John John nabbed his second Triple Crown, and Mick snatched his third World Title. All this, and the real winners weren’t even in the water. Rather, we were watching it unfold from the beach, the scaffolding, at home, at work, behind our computers, on our phones and through networks like Instagram, Twitter and Facebook. Congratulations ASP– you, ZoSea and fans of professional surfing everywhere won big. That. Was. Epic.

a) The top surfers on the WCT are absolutely phenomenal. Pro-surfing snobs who still deride competitive surfing as uninspired, mechanical or lacking in any manner, spare us you indignation and spiritual self-righteousness. It’s you who are tired, repetitive and devoid of originality. No soul in pro surfing? Go learn to use the heat analyzer and watch Slater’s reaction after getting blown out of a menacing 10-point barrel against Parko in the semis. Watch him bravely trying to maintain his composure while speaking onstage prior to his heat with John John or Mick trying contain his own emotions after realizing he had earned the score to secure the World Title. Watch nearly any heat with surfers like Kelly, Mick, Julian, Gabriel or Adriano. Watch some old heats of Andy’s. Then shut up and stop trying to affix your definition of “soul” to everyone else. Thank God our souls are all unique.

b) The drama that unfolded on this year’s World Tour, from Bells to Cloudbreak to Tahiti and the weeks leading up to the Triple Crown rivaled any in professional sports. How much tension, how many storylines, how little margin for error in waves of beauty and consequence can we ask for? I think we got our money’s worth (and oh yeah, that’s right –I watched every contest online, for free!)

c) Mick may (rightfully) be 2013 World Champ, but Robert Kelly Slater is still the greatest surfer in the world. Right now. At age 41. Soon to be 42. How long can he continue to defy the laws of nature? Seriously? Had he won, I don’t think we’d ever really know. I think he would have retired. I’m a third-generation native of Florida and a die-hard Kelly fan. I wanted to see him win the World Title as much as anyone. But at the end of the day, I was stoked just to watch him put his full talents – his very soul – on display in the emotional way that he did following the loss of the title to Mick.  Selfishly, I’m thankful that his own competitive drive and pure love of surfing will bring him back for yet another year. It’s historic. It will never be duplicated. And each passing year only adds to that legacy.

(Disclosure: I feel for Yadin Nicol, but believe that his heat with Fanning was a true coin-toss. And, I don’t believe that Mick’s last minute wave against CJ was overscored. I do, however, believe that both of Hobgood waves were underscored, as has been the case with both CJ and Damien many times over the years, in my opinion. Perhaps that’s just my Florida bias. In any event, we can’t change history. And frankly, at this point, I’m not sure I’d want to.)

d) The ASP won BIG time, controversy be damned. Here’s the dirty little secret of subjective judging: it’s as compelling as it is maddening! It’s going to be extremely interesting to learn what the viewership numbers were online. I watched nearly the entire comp on my desktop, but had to leave my house for a different event prior to the final. There, at a holiday performance of the The Nutcracker, in which my daughter had a role, I had brief opportunity to steal away and catch a few minutes of the final on my cell phone. And there in the hallway, surprisingly, three other guys were doing the exact same thing, or otherwise asked for an update from me.

Now, with Kelly returning next season, the schedule enhanced yet again with the addition of Margaret River, and a contract with ESPN in hand, the ASP has a legitimate shot to get their plane in the air. They’ll need to take quick advantage, because they very likely dodged a bullet by Kelly not winning the title. Once he does decide to call it a career, there’s little doubt that it’s going to present a powerful vaccum for ZoSea, the parent company of the ASP, to work against. And, as great a champion as Mick may be, and as dynamic a surfer and promising a future world champ John John seems destined to be (or Julian or Medina), it’s going to take the kind of effort and infrastructure that ZoSea seems to be putting in place to keep the tour strong once Kelly calls it quits. But for this moment in time, in the weeks leading up to and during this historic North Shore season, ZoSea, the ASP and fans of pro surfing have all won. Call it a Triple Crown.

Not: The above article was originally created for and published on The Inertia, Surfing’s Definitive Online Community. To see full reaction and discussion of the article, click here.