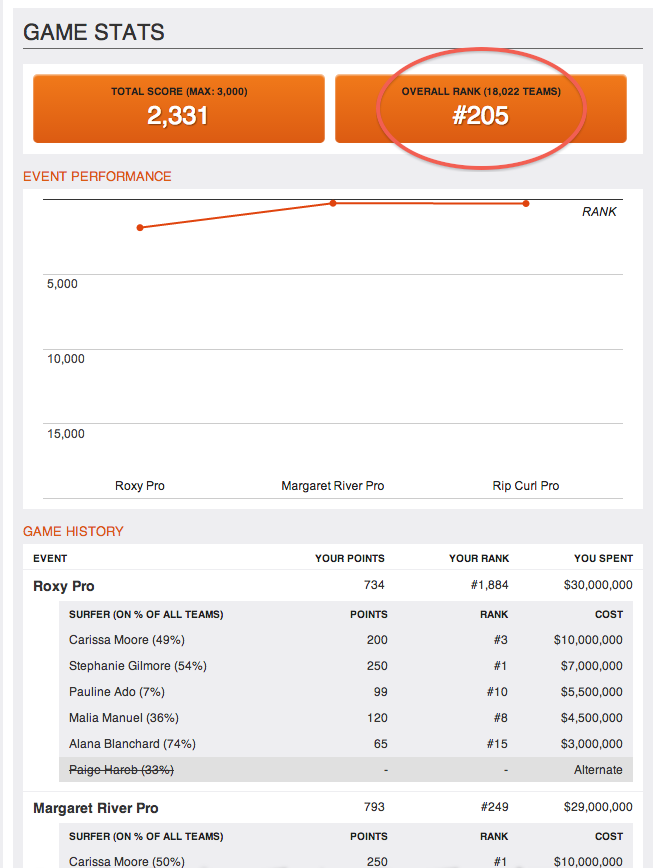 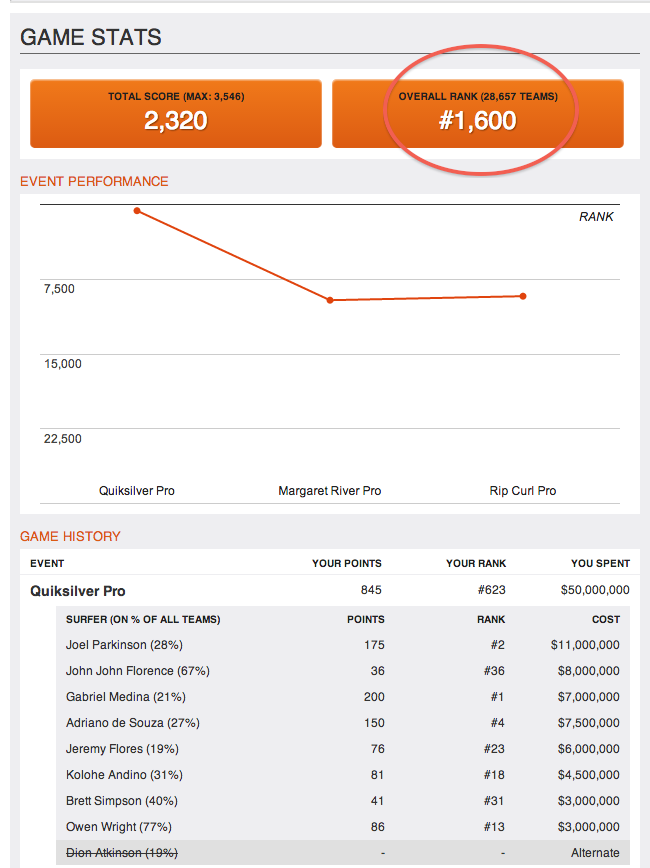 Three events into the 2014 Fantasysurfer season and I am looking pretty good… Top 95th percentile on the men’s side, top 99th percentile on the women’s side. Too bad they don’t offer the Grand Prize trip to Hawaii for the women’s division! I’m going to have to make a bit of a move if I want to win it for the men’s. But there’s plenty of time left to do that. I’m still within striking range. The stats here show the teams I began the season with (first event) and not my current lineups. I dropped a bit on the men’s side and improved a bit on the women’s. You’ve got to be consistent. With 28,000+ playing men’s, and 18,000+ playing women’s, just one bad event can really set you back to the point where you’d have no shot at winning the thing. So we’ll see how threst of the season goes. Eight more events to go, with the Billabong Pro Rio up next!

Fantasy Surfer: Oh So Close to the Grand Prize! 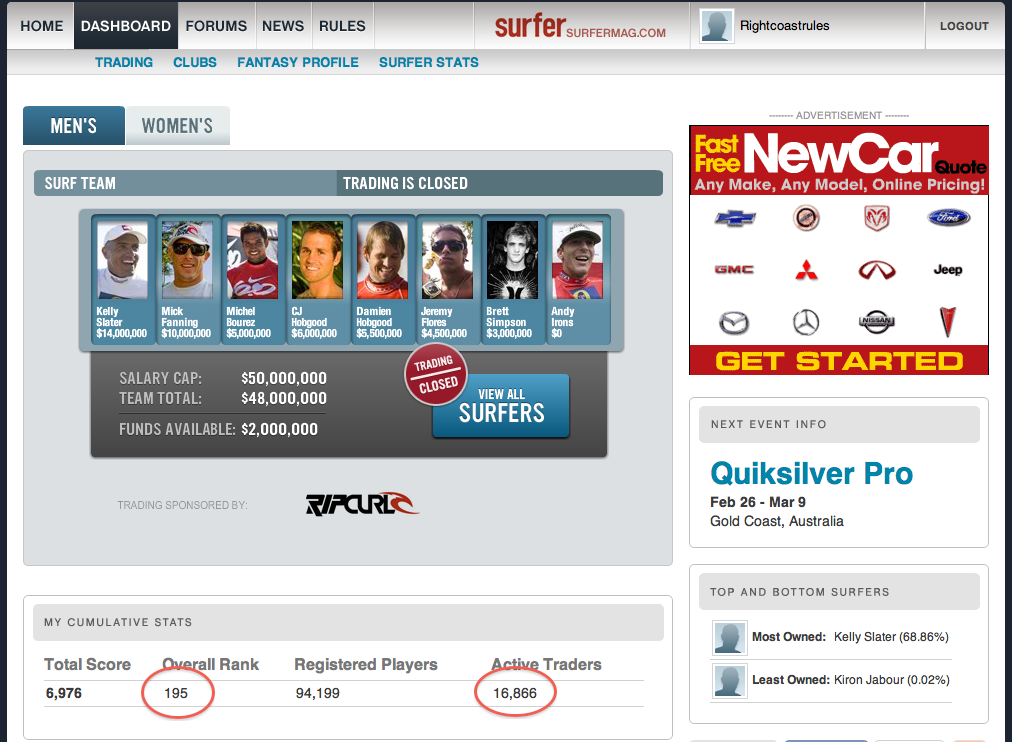 I’m a big fan of professional surfing and follow the ASP World Tour pretty closely each year. I love to watch the world’s best surfers on the world’s best waves and end up watching most of the contests online. A few years ago, Action Sports Group, the media company behind Surfer, Surfing, Snowboarder, Powder, Bike, Skateboarder and several other great media titles, started an online fantasy surf league called Fantasysurfer.com. The object of Fantasy Surfer is to utilize a $50 million payroll to build a team of 8 surfers for each contest, choosing from the 40 -50 entrants for each World Tour event.

I’ve done pretty well each year that I’ve played and don’t think I’ve ever finished below the top 90% of all players. This year, I almost won the thing. Check out the stats from my team’s (Rightcoastrules) screenshot from the final event, the Pipeline Masters in Hawaii, which commenced on Dec. 16th, 2010. There were 94,199 total registered users, most of whom dropped out at some point during the year. There were 16,866 active users who actively played all year for the title. I came in 195th. That’s the top 99.99% of all active players!

Johnny Correll, a surfer and IT administrator from Virginia Beach was this year’s winner. The Grand Prize that I almost won that Johnny will now be enjoying was a nine day trip for two to the Nemberala Beach Resort in Indonesia with all expenses paid! Dammmmmmmmmm youuuuuuuuuuuuu Johnnnnnnnnyyyyyyyyyyyy!!!!!!!!!!!!!!!!!!!!!!!!!!!!!!!!!!! There, I feel better.

An interesting note: Take a look at my last team lineup to see an example of my maddening mix of brilliance and careless oversight.

As you can see, I had actually selected the event’s eventual winner, France’s Jeremy Flores. I doubt there were many who made this same call. Jeremy is a solid mid-level guy, really skilled in most kinds of surf, though not exactly known for his big wave surfing in Hawaii. On the other hand, you can see that I also had Andy Irons on my team. As most in the surf world know, Andy had passed away tragically from a serious illness just weeks earlier. In fact, the entire event was dedicated to his memory.

I still had $2 million available to pick up one surfer, which generally affords you a wild card entry, usually a local talent from the area that is hosting the event. In Hawaii, the wildcards are usually pretty good and legitimated threats. I had been using Andy as a placeholder on my team as a sort of tribute to him, and had intended to scout the available wildcards prior to the event’s start and select one in place of Andy. As it happened, I got very busy and then sick myself, and ultimately the contest began with my not making an alternate selection there and leaving $2 million sitting on the table that could have been put to great use by either selecting a wildcard or upgrading one of the other surfers. There’s no certainty as to what that might have done for my event and overall scores, but leaving it the way it was certainly didn’t help.

Have fun in Indo, Johnny. The next round of fantasysurfer starts in 60 days and I intend to win it.